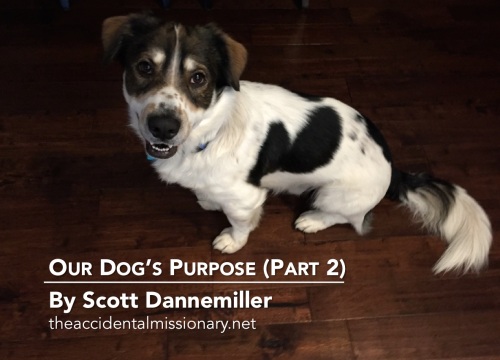 If you missed Part 1, check it out here.

Loss is a funny thing.  It leaves you with an emptiness that you know nothing can fill.  But you still try to fill it anyway.

Yes.  The little dog our kids had both secretly wished for over that broken wishbone.  The one who arrived Heaven-sent, with a wishbone tattoo on his nose.   He left us just after Christmas.  Way too soon.  We found ourselves saying things like, “I miss Smooch.”  And, “I wish he would just come back.”  Gabby and I felt like the worst parents in the world.  Who the hell gets their kids a dying animal for Christmas?!

One night, Jake innocently asked asked, “Dad, can we make another turkey for dinner?”

“Because I think we need to do another wishbone.”

I know most psychologists ask you to take time to grieve a loss.  Heck, there’s probably a scale somewhere that gives you a recommended duration.  Granted, Smooch was no goldfish (43 seconds), but he wasn’t a spouse either (Umpteen years). It wasn’t a week before I dove head-first into searching for another dog for our family.  This time, the criteria were simple.  I was now looking for another Smooch.  A beautiful dog who behaves perfectly, bonds instantly, loves unconditionally, and brings joy every moment they are alive.

The task seemed impossible.  Until the day I was on a business trip in Florida and spotted this guy on the Williamson County Animal Shelter website. 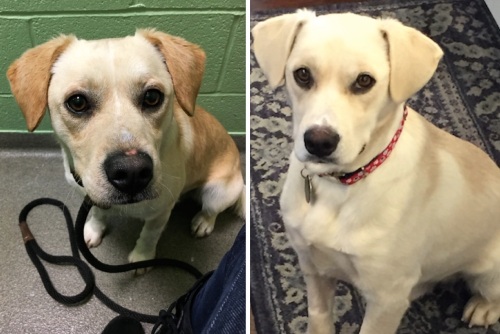 I called Gabby immediately!  “Hey babe!  You have to go to the shelter NOW!  They have a dog named Junior that looks like he could be Smooch’s twin!”

Gabby, ever the practical one, was guarded.  She wasn’t sure she wanted another dog so soon.

Junior looked just like Smooch, if Smooch had spent 20 minutes in an oven at 325 degrees.  Gabby’s report was that he was friendly, but guarded.  He was also a bit smaller.  A little slow to warm to people.  But he was a very sweet pup.  When she asked the shelter staff about Junior, they told her that he was two years old (just like Smooch) and picked up on December 29th, the day Smooch died, and he was found at the exact same intersection of Columbia Pike and Spring Hill Circle where Smooch was picked up.

In my mind’s eye, I could read Audrey’s words.  The ones that closed out her goodbye note to her beloved pal.

“We don’t want another dog.  We just want you to come back.”

Gabby put a “hold” on Junior until I could come home and met him.  Meantime, she did a Google search on the location where both dogs were found.

“Who knows?” she mused.  “Maybe there is some crazy underground lab there where they breed beautiful, perfect dogs that look like ‘forever puppies’, and they just come springing up out of the ground.  We can just drive by every month and get another one!”

When she pulled up the aerial view, she couldn’t believe what she was seeing.  The major streets in the neighborhood where the dogs were found were almost a carbon-copy of our kids’ names. 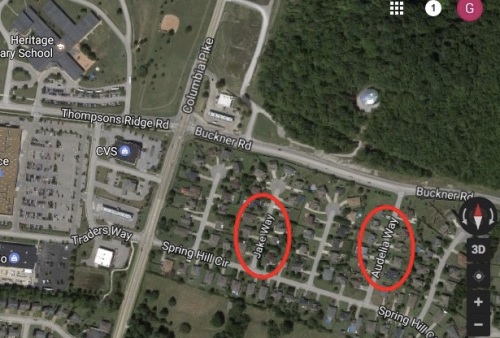 Gabby and I talked that night on the phone. What a story!  I know we are fairly hard-headed, but we suspected that God was going the extra-mile to give us such a blatant sign that we were on the right path.  The buried note.  The date Junior was found.  The location.  The street names.  The uncanny resemblance.

“What should we name him?” Gabby asked.

“I say Toasty.  Since Toasty is the other name Audrey gave to her blankets, and this dog looks like Smooch has been lightly toasted.”

Then Gabby offered, “But Junior isn’t quite as perfect as Smooch was.  He’s a little more shy.  Not quite as lily white.  Maybe we name him ‘James’ – like from the Bible.  You know… Jesus’ brother.”

Now that’s funny.  Talk about a guy who could never live up to the expectations.  You can hear Mary now.

“James?  Why can’t you be more like your brother?”

We agreed to let the kids pick the name.

The next day, I went to the shelter as soon as it opened.  I couldn’t wait to meet Smooch’s twin.  I burst through the door, filled with excitement.

But when I took the dog for a walk, he wasn’t Smooch.  Sure, he looked like Smooch.  He behaved a bit like Smooch.  But as much as I wanted him to replace what we lost, he wasn’t the same dog. Then again, he was a sweet dog, with a wonderful story. Yes.  The story.

The signs from God.

We signed the adoption papers immediately.  We knew the kids would fall in love with him.  After all, he was so close to the original.  Before bringing him home from the shelter, we wanted to run him by our vet’s office.  It was important to us to get a clean bill of health from the shelter.   We didn’t want to put our kids through the trauma of another sick dog.

Our vet marveled at the uncanny resemblance.

“They had to have been from the same litter,” she said.

But that’s where the resemblance stopped.  Junior was not a compliant dog.  He was scared.  And aggressive. It took a muzzle and three people just to hold down his little 30-pound body and take his temperature.  Sure enough, he had a fever.  And then he tried to bite the vet.  The same one who showed incredible patience with Smooch, and even donated to the UT school of veterinary medicine in his honor.

“James, why can’t you be a little more like your brother.”

Sadly, as much as we wanted this dog to be Smooch 2.0, he wasn’t.  With the constant parade of kids coming in and out of our house, we couldn’t trust this little guy not to snap at someone.  Disheartened, we returned Junior to the shelter an hour later.  We found out later that Junior was adopted by another family the very next day.

A good story for Junior.  But not the one we expected.

Truth be told, I think I was the one most devastated by all of this.  Ever since I was a kid, I always dreamed of having a dog who was truly my best friend.  One who never left my side.  One who looked at me with eyes of pure devotion, undistracted by anything else around.  A yellow lab, to be exact.

When you hold one of your deepest wishes in your hand, it can feel like such a gift.  A God-ordained blessing.

And when that gift is gone, you wonder what you did to lose it.  Or what else you couldhave done to keep it.  Then trying hard to fill the hole left behind.

As if we’re in control of such things.

Some people say that dogs are heaven-sent.  After all, the word itself – DOG – is just GOD spelled backwards.  And funny enough, I think this whole experience has taught me that I had been doing things backwards all along.  Taking control of the situation.  Making decisions.  Forcing the issue.  Manufacturing signs and coincidences to somehow prove that God had a hand in my life.

Instead, I think God would have preferred that I just rest.  Let Him take charge.  Basking in the glow of a blessing, however fleeting, and showing gratitude in both the gain and the loss.  Because, in the end, I don’t believe God cares so much about the minutiae of everyday decisions we make.  It’s not like he’s some great GameShow Host in the Sky who blesses us for choosing Door #1 and sends us away penniless if we choose Door #2.

Instead, I believe God is someone who walks the many-forked path of life with us, following us wherever we go, and encouraging us to look his way from time-to-time so he can remind us…

We met Frank a week ago.  He is the world’s oddest looking dog.  Fifty-five inches long from nose to tail, and only seventeen inches tall.  The canine version of a platypus.  He is part Basset hound, part Australian shepherd, and part “cousin-who-you-shouldn’t-take-to-fancy-parties.” 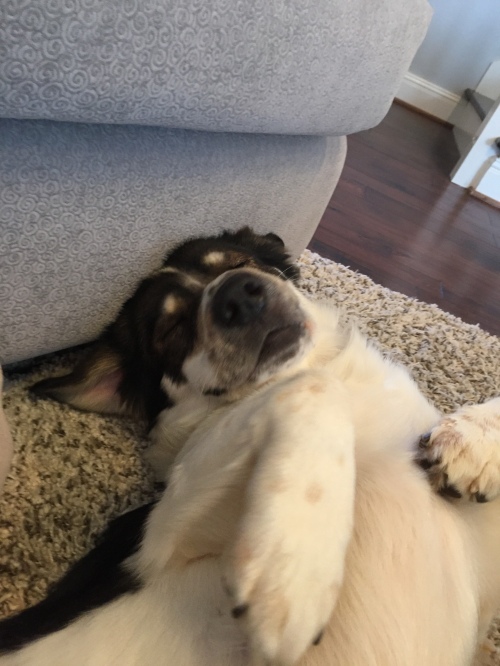 Even so, when we looked past the imperfections (the inappropriate man-spreading, the sloppy drinking, and other rough-yet-fur-covered edges) we saw a blessing in disguise.  No back story.  No miraculous signs.  Just an imperfect dog that was looking for a perfect home.

When the kids came home from school to find this crazy mutt wagging his giant tail in the doorway, they were beyond thrilled.  He greeted them with kisses.  They greeted him with smiles and laughter.  They named him Frank after St. Francis, the patron saint of animals, the frankfurter (due to his hot doggish shape), and Frankenstein, since he looks like he was created in a mad scientist’s lab.

Later that evening, Frank got settled in for a nap in his new living room.  He was soaking up the soft rug while the kids scratched behind his ears.  It was peaceful.

And as we looked on, enjoying the view of happy kids and a happy pet, Audrey pointed to the top of Frank’s head.  Her sincere, sweet voice cutting the silence.

And if you look close, you can see it, too.

Peace I leave with you; my peace I give you. I do not give to you as the world gives. Do not let your hearts be troubled and do not be afraid.  John 14:27 NIV

* If you enjoyed this post, subscribe by clicking on the link at the top of the page.  Or follow us on Facebook and Twitter.  And, if you’re still dying for more, pick up our book The Year Without A Purchase, (ironically) sold on Amazon, Barnes & Noble, or WJK Press.