One Missionary’s Thoughts on Short-Term Mission 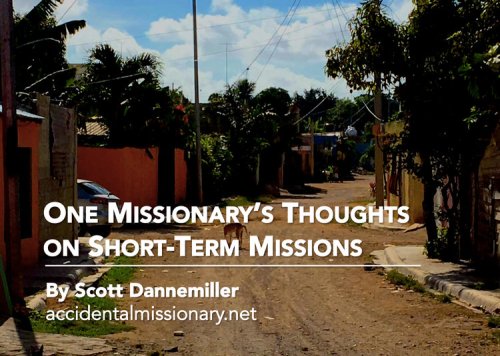 If you are a parent, you’ve seen it at least a squillion times.  You’re working in the kitchen and your tiny child’s cherub-like face looks up at you and says,

In the idyllic households, the parent looks upon the child, acknowledges his servant’s heart, cradles his cheeks, and invites him to the table. Bathed in filtered light and surrounded by flitting hummingbirds, you make a delicious pan of brownies together.  You crack the eggs into the bowl.  You delicately measure the ingredients.  You taste the batter, licking the giant spoon simultaneously.  And let’s not forget the giggles when you, the parent, dust some flour on the tip of your little angel’s nose.

If your house is anything like mine, the scene above couldn’t be further from reality.  When my kids say “I want to help,” my brain’s KIDSPEAK translator shouts back “I want to see if we can make this basic task take seven hours longer than it should, and DESTROY our house in the process!”  So, I drape the entire kitchen in plastic tarps as if we’re going to spray paint an ’86 Buick.  I change into the same clothes I use for yard work.  I watch my child lick his hands before touching every ingredient.  He stirs the concoction with the handle of the wooden spoon he just sneezed on, and we place the mix into the oven.  We bake it at a temperature high enough to kill most of the bacteria.  There are no pauses.  No breaks.  Impatient, my child convinces me to cut the brownies before they have cooled, creating oddly-shaped, barely-edible lumps of congealed chocolate.   He tastes one of them, puts the half-eaten blob back onto the plate, and rushes off to play, leaving me slumped over in a kitchen chair, looking like Al Pacino in Scarface, surrounded by mountains of white powder.

This analogy came to mind as I reflected on our family’s recent mission trip to the Dominican Republic.  A few months ago, we were among the roughly two million annual short-term American missionaries with good intentions and servant’s hearts who said, “I want to help.” So we packed up roughly 73% of our household belongings and flew to the middle of the Caribbean Sea to do the work of Jesus.

Only we’re not Jesus.

Besides being the Son of God and Savior of the World, Jesus was also a carpenter, which is the cat’s pajamas in terms of valuable skills to bring on a mission trip where your main job is to pour a concrete roof on a school and build a couple of bathrooms at a church.

Much like the Son of Man, I spent my youth working for my father.  However, that’s where this analogy breaks down.  Even though dad was a self-employed general contractor and God-like in my eyes, my apprenticeship was devoted largely to honing my skills in complaining and “half-assing” a job. Mission trips don’t have much use for that.

Now, before you get the wrong impression, please realize that my wife and I aren’t novices when it comes to international mission.  We spent a full year working as missionaries in Guatemala.  We know a thing or two about ministry in a foreign country.  Still, culture is a powerful force.  The rugged individualism and “you are what you produce” mindset of our American upbringing can easily overshadow the best of intentions, transforming an opportunity to share God’s love into some warped quest to demonstrate how much “work” I can accomplish.  It’s a weakness, for sure.

The good news is, God is pretty good at using our weakness for His purpose.

Our mission trip was well-coordinated by the host organization, Praying Pelican Missions.  Still, like most service trips in a developing country, there were deviations from the plan.  Our objective was to host a Vacation Bible School at a local school in the mornings and do construction projects in the afternoon.  However, unexpected weather changes, transportation issues, and a limited number of tools meant that there were breaks in the action. Schedules got shifted.  Plans changed. Work was left undone.

At one point, I became a bit cynical, wondering what we were truly accomplishing.  After all, we came to the Dominican Republic to produce a tangible result.  Build a roof.  Construst some bathrooms.  And, while we were productive, I would be lying if I said we were completely effective.  We made mistakes that required rework. We labored alongside Dominicans who were far more skilled than we were, and were gracious to fix our errors.  And, there is no doubt in my mind that our free labor likely replaced a paid Dominican job or two, at least for a couple of days.

Needless to say, it was messy.

Halfway through our trip, I walked into the sanctuary of our Dominican church and heard my 11-year-old son doing a decent job of playing an old drum set.  He had some lessons a few years ago, but he’s not a drummer.  In fact, Jake rarely seems interested in music, which, as a guitar-playing father, is a bit depressing.  I’ve always dreamed I might one day play some songs with my kids.

Without saying a word, I picked up my guitar and started strumming along with him.  Jake looked up, smiled, and kept tinkering.  A brief jam session turned into a full song.  And then a second. Before I knew it, we were knee-deep in a “Sweet Home Alabama/Friends In Low Places” mash-up, having a ball.  No one passed out any Grammy Awards afterward, but it was quite literally a dream come true.

When we finished, I asked him “So… what made you decide to start drumming?”

Jake answered, “Victor.  He showed me a couple of things.  Said he would give me a lesson if I wanted.”

Just then, Victor walked in.  He’s a Dominican, and a high school senior.  And, like most high school kids, Victor is busy.  He is busy with studies and the church youth group.  He even plays drums in the church praise band.  Still, he had sacrificed his time during the week to help us, bringing us water, chaperoning us around the town, finding us medicine, and food.

As the week went on, Victor and I connected.  He befriended my kids and shared his music.  He listened to my stories.  Then he told me about his family.  His hobbies.  His desire to learn to play guitar.  His dreams of becoming a medical professional. 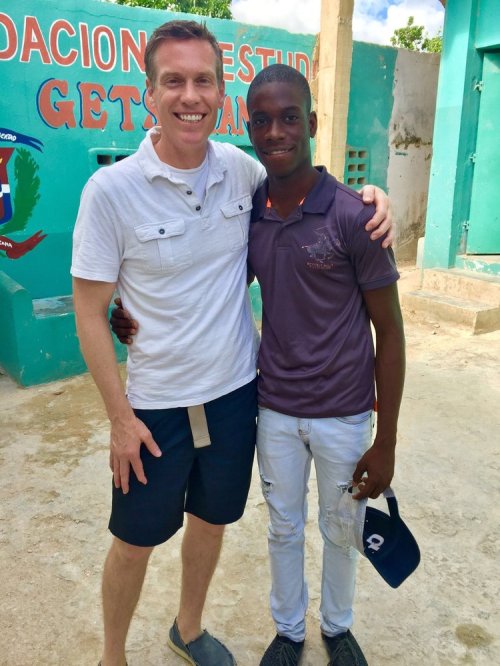 As the week came to a close, I left a donated guitar with him (with the blessing of our hosts, of course).  It was a small token of my appreciation for facilitating a beautiful moment between me and my son.  And in that moment I was reminded of the purpose of short-term mission.

It’s NOT about coming home and realizing how blessed we are.  If this is all we take from mission, we relegate these trips to a form of self-indulgent tourism.

It’s NOT about seeing how joyful “those people” are.  If this is all we take from mission, we blind ourselves to the reality of poverty.

It’s NOT about all of the work we produce. No more than baking with your toddler is about the quality of the brownies.

And surprisingly, it’s NOT about bringing God to a developing nation.  After all, there are more Christians in the Dominican Republic than there are in the United States.

So what’s it all about then? Well, much like shared moments with those you love, mission is about making connections. Over time.  It’s about staying curious – realizing that everyone you meet knows something you don’t.  It’s about seeing how God works in the lives of those who are different from you. It’s about true partnership – not paternalism. It’s about service.  It’s about sharing, growing, listening, and learning.  And taking this new learning and applying it by giving when it’s not convenient, standing up for the marginalized, and giving a voice to the forgotten.

And for me, it’s also about texting back-and-forth with Victor about the right chords to that song he’s trying to learn.   It’s him asking about how my kids are doing in school.  It’s checking in to make sure his home didn’t get flooded in the latest Caribbean hurricane.  And him responding by telling me he’s donating his time to help rebuild a neighbor’s roof.  And both of us feeling more connected than before.

But most of all, mission is about experiencing God in unconditional kindness shared between strangers. Now brothers and sisters in Christ.

And with this foundation…

with true relationships as the starting point…

the future is filled with hope.

*Below are some things to consider before your first (or next) mission trip.

The DO’s and DON’T’s of Short-Term Mission

6 responses to “One Missionary’s Thoughts on Short-Term Mission”