To Those Like Me Who Can’t Wait for a Savior 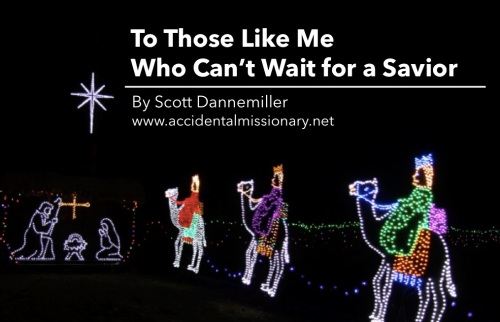 My grandpa used to leave his Christmas lights up all year.  It hindsight, I think it’s a lovely tradition. He would turn them off in early January and then set the house aglow in multi-colored glory once again on the Fourth of July.   Since he was a veteran of World War II, folks let it slide, offering the excuse that his quirkiness was likely a product of a deep love of country, or a passion for the Christmas season. But when he poured gasoline on his yard and set it on fire to avoid having to cut the grass one summer, folks got wise to his true motivation.

One man’s lazy is another man’s genius, I always say.

Reflecting back on grandpa’s tradition, he was definitely ahead of his time.  It seems the Holiday season starts earlier every year. And I’m sure you’ve seen it, too.  Just last week, (early October) I visited the local Home Depot where I was greeted by a plethora of inflatable yard decorations under the brand name of “Home Accents Holiday”.  By the looks of things, the accent with these decorations is pretty thick, given that the array includes a Hobbit-sized animatronic Santa doing the “Hustle” ‘neath a disco ball suspended from a six-foot-tall candy cane arch, or, if you prefer, an 8-foot Christmas pirate ship filled with booty that Santa and his elves plundered from the Maersk Alabama just off the coast of Somalia.

But honestly, Home Depot was late to the party.  This past summer, the home shopping channel QVC was hosting a “Christmas in July” sale, announcing from its website that “you can experience all the fun and excitement of the holidays five months early.” We should all thank the dear, sweet, eight-pound, six-ounce baby Jesus for such a golden opportunity, because Lord knows a Santa-themed bikini at half-off would make any mom the envy of the neighborhood swimming pool.

Please don’t let my sarcasm fool you. I am just as susceptible to the holiday hustle as anyone else.  As I type these words, my insides are itching to listen to Nat King Cole croon The Christmas Song or watch The Polar Express for the bajillionth time.  I am longing for the aroma of a fresh cut fir and the flavor of sugar cookies drizzled with icing.  Frankly, I’m so hell-bent on getting to Christmas, that, were it not for pumpkin pie, I would lobby Congress to delete November from the calendar.

I know I’m not the only one who hates waiting.  I think impatience is part of our physiology as humans.  Who among us hasn’t cursed the internet gods when an entire newspaper fails to appear on our smartphone screen the moment we hit Enter?   We roll our eyes when the Subway customer in front of us dares to slow down the sandwich crafting process by ordering his hoagie “toasted”, using that miraculous 20-second toasting device powered by thunder bolts and wizard fire.  And standard shipping?  Puh-LEASE! Might as well be delivering my Amazon package via the saddle bags of a geriatric, three-legged horse.

Ain’t nobody got time for that.

It’s no wonder then, that we rush the birth of Christ.  Given the current trend, it won’t be long until we start taking Labor Day literally, putting Mary on a Pitocin drip to try and induce delivery in early September.  It’s like the world is saying,

Who cares if the baby Jesus is only a zygote!  It’s gonna’ take a miracle for me to win the neighborhood Christmas decoration contest this year, and I need a Savior, ASAP!  These lights ain’t gonna’ hang themselves!

But here’s the problem: In all the rush to wrap the Christ-child in our arms, we’re missing out on something important.  Something beautiful. Something deeply satisfying.

To most of us, anticipation is something to be avoided.  But, in truth, science tells us that we are actually wired for waiting.  I know I’ve shared this little nugget before, but it bears repeating.

In studying the brains of monkeys and humans, neuroscientists wanted to find out the conditions that generated the greatest release of dopamine – the brain’s “feel good” chemical.  Typically, this chemical is released when we experience something pleasurable.  Like good food.  Or winning a prize.  Or laughing at a joke.

Yet, when scientists measure the chemical release in the brain, they find that the greatest shot of dopamine doesn’t actually come when we acquire the item we desire, but rather, BEFORE we receive it.   Hence, it’s not the gift that gives us joy.

It makes perfect sense when you think about it.  Anticipation heightens our awareness.  It puts us on alert.  We scan every face, every conversation, and every event, searching for that thing we desire the most.  And when it comes to Christmas, we’re not really looking for twinkling decorations, or delicious treats, or familiar songs.  We’re searching for the feeling we associate with those things.

It’s a feeling of warmth.

A feeling of hope.

And kinship with strangers.

Yes, indeed.  What we seek is love.

Unfortunately, our traditions have tricked us.  Like some sort of Pavlovian experiment, we now believe the ringing of jingle bells is what brings about the joy of Christmas. But that’s simply not true.  The feeling we desire is one that has been with us all along.  Like Christmas lights on my grandfather’s house, ready and waiting to shine.

Because many years ago, Love came down to Earth.  And it never left us.  It is life-giving, overcoming the most hopeless situations in our midst. If only we would have the eyes to see it.  Consider the words of John.

14 The Word became flesh and made his dwelling among us. We have seen his glory, the glory of the one and only Son, who came from the Father, full of grace and truth.

There it is.  Grace in place of grace.  Love on top of love. The light of life.  Dwelling here among us and living within us.  Each and every one.

So as the Christmas season approaches, hang the lights, sing a song, and inflate a disco Santa if you must.  Whatever it takes to spark a feeling of Advent within you.  And I’ll do the same.  Because people in your corner of the world are waiting in eager anticipation for that spark.  Not only this Season, but every day of the year.

Bringing a bit of Heaven down to Earth.

* If you enjoyed this post, subscribe by clicking on the link at the top of the page.  Or follow us on Facebook and Twitter.  And, if you’re still dying for more, pick up our book The Year Without A Purchase, (ironically) sold on Amazon, Barnes & Noble, or WJK Press.