Through The Eyes of a Child: Baltimore and Beyond

When you’re north of 40 years old with two kids, spring break looks a lot different than it did in your twenties. Instead of beaches, beer and poor life choices that end with a misspelled tattoo, you take a Tennessee road trip with your family. While that may sound simple, it’s anything but. Allow me to explain.

Our trip started innocently enough, with a plan to stay at the Peabody Hotel in Memphis. The place is known for its small army of ducks that live on the roof and ride the elevator to the lobby each morning to swim in the fountain. It’s like a fairy tale, and well worth the price of admission, especially if your room is free courtesy of some credit card points.

On day two, we rose early with our hearts set on seeing the Memphis Zoo. After a big Southern breakfast of grits, gravy and grease, we loaded into the car. As we rounded the corner just two blocks from the restaurant, I caught sight of a large sign that read: 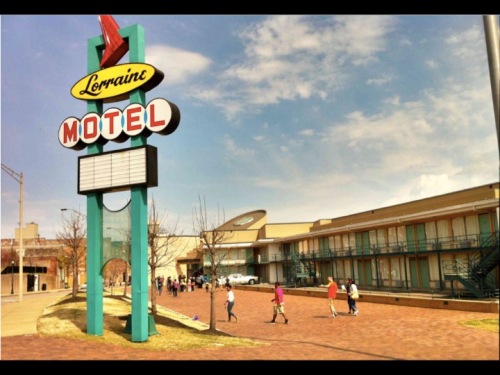 “Isn’t that where Martin Luther King was assassinated?” I asked.

“It is.” Gabby replied. “And now it’s the National Civil Rights Museum.”

I glanced back at the kids, still sporting syrup on their chins.

Pulling into the parking lot, I murmured, “Maybe we can just look at it from the outside?”

“Is this the zoo?” Audrey asked, amazed that the trip was so short.

She elongated her response with a well-placed whine. “A museeeeeuuuuuuum?!?!”

“Don’t worry honey. We’ll go to the zoo in a minute. I just want to see something.”

Gabby and I got out of the car and stood outside the hotel. The kids bolted across the parking lot like a couple escaped convicts, and behaved as such, lacking only the orange jumpsuits. I looked up at the small, nondescript building. The balcony outside room 306 looked just like it did in pictures I’ve seen of the night Dr. King was assassinated.

When I looked back toward the plaza, the kids were standing at a kiosk, wildly pressing buttons. When we finally caught up to them, they were halfway through a short video.

“What’s this about?” Jake asked.

“It’s about how he led a movement to change laws so people wouldn’t be mistreated because of the color of their skin.”

Audrey immediately ran to the next kiosk. Jake, distracted, ran to catch up to her. There were a half-dozen stands in all, and they stopped at every one, watching the videos and growing calmer with each passing minute, occasionally glancing up at the balcony where King was shot. I grew nervous. Some of the images were hard to stomach. Angry people yelling at lunch counters. Fists pounding. Dogs barking. Faces marked with dripping blood.

I thought to myself. This isn’t appropriate. They’re only 7 and 8. This is too much for young kids.

When they finished the final video, we were standing right by the door to the museum.

“This isn’t the zoo,” I reminded them, hoping they would drop it.

Gabby looked at me and shrugged a “why not?” I tried to manipulate the situation, feeling hypocritical based on my recent post about racism and the need to move beyond our shame.

“Audrey. There are no animals inside,” I quipped. “And no rides.”

She tugged on my arm and pulled me toward the door. I told the kids that this was a quiet place. Not just regular quiet. Silent quiet. To which they replied that they knew dad.

And they still wanted to go.

At that moment, I heard God say,

If your kids want to go learn about civil rights instead of petting goats at the zoo for the zillionth time, then take them to the museum, you moron!

As Gabby bought the tickets, I started to sweat at the thought of my two young, white kids running and screaming through the civil rights museum. They are nothing if not loud, irreverent, and unfiltered. Unless this was the most inappropriate museum in the history of museums, there wouldn’t likely be any Emmit Till’s Tilt-A-Whirl or Jackie Robinson’s “Bat Like The Pros” baseball challenge to sap their energy.

But then it dawned on me that it wasn’t their behavior I was worried about. This would be heavy. And messy. And real. There would be confusion and sadness and heartache and questions. Questions for which this father has no answers.

We walked through the turnstile. I took comfort in the fact that the kids wouldn’t last more than fifteen minutes. It was clear their motivation was seeing the inside of room 306, which was at the end of the tour, and the mystery pulled them along like a rushing stream.

And so did they.

Audrey crouched down in an exhibit that demonstrated how slaves were chained in a 3’ x 3’ space when they were transported across the Atlantic.

We sat in the bus seat next to Rosa Parks and listened to the recorded voice of a bus driver telling her to give up her seat to a white man.

Jake watched videos of people battered and broken for daring to sit at a lunch counter.

And they were quiet. Silent quiet.

Standing next to Jake at an exhibit on Brown vs. The Board of Education, I saw a question come across his face. I knew he was thinking of his best friend at school, who is African-American.

He asked, “Dad? So I couldn’t go to school with Ben back then?”

He paused, then muttered, “That’s stupid.”

More uncomfortable questions came. With an innocence that fails to phrase things in a politically correct fashion. And I continued to sweat. I did the best I could, but sometimes my best answer was, “I don’t know.”

In the questions and the confusion, fifteen minutes turned into three hours.

The zoo became an afterthought. My heart swelled along with my feet. The experience was heavy, and depressing and sad. It was also hopeful, inspirational and soul-stirring. It was one of the most profound moments I have ever shared with my children.

And I almost missed it.

And this is what I think Jesus was getting at when he said:

“Truly I tell you, unless you change and become like little children, you will never enter the Kingdom of Heaven.” (Matt 18:3 NIV)

Too often I try and shield my kids from the ugliness of reality. I want to sanitize the truth to make it more palatable, transforming the nightly news into a made-for-Disney script where it’s easy to tell the good guys from the bad guys, and everything is resolved with the wave of a wand. But here’s the problem with that.

And what I learned that day at the museum is that we can’t reduce the civil rights struggle down to the “I Have A Dream” speech any more than we can say that the resurrection is a story about Jesus “going up to be with God in Heaven.” By doing so we turn reality into a buttoned-up fairy tale with easy answers. A concluded story that has already been written.

But reality is messy. And ugly. And heart-breaking.

Reality is Selma. And Ferguson. And Baltimore.

Reality is nails and wood. A crown of thorns. A pierced side.

But reality is also a place where we live. Where we contribute to a story with no set rules and no easy answers. One where we can help write the ending. And in this quest, one thing is certain. Healing begins with a change of heart. And our hearts will never be changed if we choose to stand outside the fray, looking on like a patron outside a museum. Unfazed, untouched and uncommitted. We must be willing to pay our admission. To abandon the fairy tale, acting like adults with all of the answers, and instead approach the messiness with a child-like innocence.

* Since my last post, The Shame of Silence, people have asked how they can get involved.  For Nashville residents, I have found NOAH (Nashville Organized for Action and Hope) that works for affordable housing, economic equity, and criminal justice.  For those living elsewhere, consult the NAACP website to find a local advocacy group in your area.  Finally, if you enjoyed this post, submit your email at the upper right to receive new blogs hot n fresh to your inbox.  Or, Like us on Facebook.  And, for the die hard fans, we invite you to preorder Scott’s book about his family’s Year Without A Purchase on Barnes & Noble or Amazon, due out August 4th from WJK Press.

10 responses to “Through The Eyes of a Child: Baltimore and Beyond”