How Should We Respond To The Huddled Masses?

Unless you’ve been holed up in a concrete bunker for the past few weeks, you’ve probably heard how US Border Patrol detention centers are overflowing with immigrant kids from Central America. While we’ve all been poolside sipping Orange Crush and lamenting the limited effectiveness of aerosol sunscreen, little Lupita has been traveling from Guatemala in a sweltering boxcar, followed by a fifty mile march through the desert in triple-digit heat.  It’s kinda’ like an Outward Bound summer camp adventure, only your counselor is a coyote named Miguel who demands $4000 for delivering you to a safe house outside of Tucson, provided you agree to smuggle a couple of pounds of heroin in your Hello Kitty backpack.

And believe it or not, this camp has a waiting list a mile long.

There have been over 57,000 unaccompanied children apprehended by US Border Patrol since October. That is twice as many as the same period last year. Some of the children traveling alone are preschool age. It’s a crisis of Biblical proportions that is bringing the topic of immigration to the forefront.

Many Americans are taking a compassionate approach, asking the Federal government to do everything in its power to assure these children are kept safe here in the states while we evaluate their circumstances, or reunite them with their parents abroad. Some governors are even rolling out the welcome mat to temporarily house immigrants. Churches are opening their doors to the kids to offer sanctuary.

Others are adopting a no tolerance policy. Residents of towns such as Murietta, California have blockaded roads to keep these children from taking refuge within their city limits. They argue that the situation magnifies our existing border control problem that is overcrowding our emergency rooms and social services, and putting a strain on the US Border Patrol. The belief is that anyone who wants to enter our country to work should follow the proper channels which include waiting in a 5-10 year queue, ponying up hundreds of dollars, obtaining a formal job offer, and proving that no one else in the U.S. could perform the job. Otherwise, they need to go home.

As an American, I can see the validity of both responses.

As a Christian, I can’t see how intolerance wins. Whether the immigrant is five years old or fifty-five. 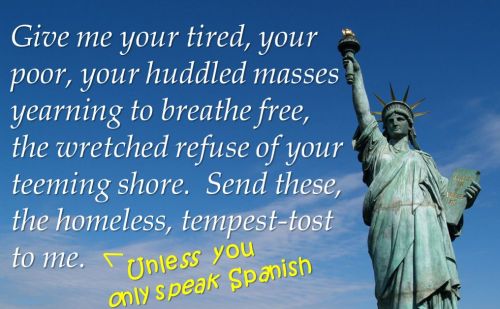 Don’t get me wrong. The border situation is a real problem. Some years ago, my wife and I heard from both sides of this debate at a conference in Arizona. Local residents shared tales of gun-toting smugglers knocking on their doors in the middle of the night demanding money and shelter. The US Border Patrol told stories of rescuing immigrants near death and assuring they were sent back home safely. They also explained how they had apprehended bad guys crossing the border, bringing drugs and preying on the addicted. Some of them even intended to do our country harm.

But the truth is, the vast majority do not.

Our family has spent the past few weeks living and serving with some amazing missionaries in one of the poorest sections of Los Angeles. A place made up largely of undocumented immigrants. It’s not an area that shows up on tourist maps. It is the most densely populated neighborhood west of the Mississippi, with 150,000 people in a two square mile area. The streets are marked by gang tags and poverty.

Yet we celebrated the most joyous Fourth of July we have ever experienced, surrounded by immigrants who see their current situation as far better than their lives of the past. They basked in the glow of their freedom and opportunity, playing music and lighting fireworks until dawn. Their BBQ grills were working overtime, perched precariously on narrow apartment balconies. The coals were still warm in the morning as they left for work. Work that most Americans don’t want to do.

They are mothers, fathers, brothers, sisters and cousins of the current wave of immigrants. Most of whom are poor and hungry, fleeing abject poverty in countries where there is absolutely no opportunity to improve their standard of living. Others are running from corrupt governments or police forces. Children face rape and death threats if they don’t join gangs and agree to participate in the violence. Coming to the United States is their only alternative.

But some argue that they have broken the law, so we should round them up and kick them out.

As an American and a Christian, I can’t help but think how wrong this is.

For one, it goes against our quintessential American “Bootstrap” belief. This new wave of immigrants is crossing deserts, dodging drug dealers, swimming the Rio Grande, and scaling 16-foot fences to find a better life. The only thing the rest of us had to do to gain citizenship was successfully traverse the birth canal while our mothers’ feet were firmly planted in stirrups north of the border. It confuses me that a culture that has a core value of hard work and determination would criminalize the former yet reward the latter.

Even if your mom had narrow hips.

Second, if we let our laws dictate what is “right”, we run the risk of criminalizing compassion.  While it is true that many of our Founding Fathers were Christians, our country was not necessarily founded on Christian principles.  In fact, our closely held values of freedom are rooted in the idea that we may believe whatever we choose to believe – the separation of church and state.  When we confuse this idea, we start to believe our laws might be a good litmus test for determining what is ethical.

And it simply isn’t true.

Consider this big bucket of crazy:   It is perfectly legal in most states to sell drug-free urine. While such a sale could jeopardize the health and safety of the public should, say, an addicted bus driver pass his drug screen, we chalk it up to creative capitalism and look the other way.

However, if a flesh-and-blood human being can save the life of his child by crossing an imaginary line in the desert sands of Arizona, we cannot allow it. Your peril is not my problem. Stay out of my country. The one my ancestors stole from the Native Americans and carved out of the land God created.

Using laws to define what is “right” in the eyes of Jesus is about as accurate as flipping a coin.

Finally, Christ calls us to love our neighbors. The Jesus we profess to follow based his entire ministry on transforming the law into compassionate, uncommon sense. If Jesus had been about the law, he would have come to us as a congressman. Instead, he was a humble carpenter. A carpenter who saw himself in the faces of the stranger, the marginalized, and the misunderstood. A carpenter who threw banquets for the downtrodden. He never calls us to protect our borders. Instead, he demands that we protect our hearts from callousness and shield ourselves with grace. His words tell us this is how our time on earth will be measured:

34 Then the King will say to those on his right, ‘Come, you who are blessed by my Father, inherit the kingdom prepared for you from the foundation of the world. 35 For I was hungry and you gave me food, I was thirsty and you gave me drink, I was a stranger and you welcomed me, 36 I was naked and you clothed me, I was sick and you visited me, I was in prison and you came to me.’ 37 Then the righteous will answer him, saying, ‘Lord, when did we see you hungry and feed you, or thirsty and give you drink? 38 And when did we see you a stranger and welcome you, or naked and clothe you? 39 And when did we see you sick or in prison and visit you?’ 40 And the King will answer them, ‘Truly, I say to you, as you did it to one of the least of these my brothers,[f] you did it to me.  Matthew 25: 34-40

What are we so afraid of? Speaking some Spanish? Increasing insurance rates? Crowded emergency rooms? Clearly there is a cost to each of these, but it seems like a small price to pay to assure that my brother in Christ has a roof over his head and enough food in his belly. But fear?

Fear is for the faithless.

Certainly, we need to protect our citizens from danger. And some people do wish to harm us, whether directly through bomb blasts or indirectly through drug deals. These are the ones we should pursue with vigilance.

But the determined father?

The frightened son and destitute daughter?

They are here. Among us. Christ in our midst. And for them we should open our arms wide. Like a Good Shepherd. Offering a warm embrace. A safe place to call home.

If only for a while.

31 responses to “How Should We Respond To The Huddled Masses?”